There were fifty-four seconds left to go in the Patriots-Chiefs January 20 playoff game.

Pete had gone up to bed and for some reason, I was still watching. I am not a Patriots fan, but I had shouted up to him to get down to see this exciting finish.

I glanced at the kitchen door where Ochi, our Great Pyrenees, had her nose pressed to the glass wanting to be let inside.

Except….Ochi, 12 years of age and happy to lie by the wood stove, was at my feet. The waggling, enthusiastic body at the door belonged to another Great Pyrenees. Ida Louise, our livestock guardian. Most recently, however, she has been known to take periodic roaming vacations from her job as farm watch dog.

Needless to say, Pete came down, not to watch the game, but rather, to hook Ida to the leash and return her to her sheep and goat companions. She looked a little down at the mouth. She is still a “pup” in her interpretation of that word, just one year old, and that should allow for disobeying rules sometimes.

Still, she knows her job. She must constantly pay attention to her surroundings. She must be ready to bark the instant something disturbs her. At night, if I switch on the outside light and call one of the cats, she barks. At daybreak the crows fly overhead, and she is alert to their direction and location and follows them across the 13 acre field. The great horned owls who are regular residents here know she protects the broilers from their talons all summer. I am sure the coyotes and foxes are aware of her presence.

But some evenings, things just get plain boring. You can only roll around in the hay and toss your bone in the air for so long before the desire to see who is awake inside the house overcomes you. She is insanely clever. Jake’s frequent exclamation is, ‘How in the world did she get out?’

Ida is not locked in a small pen. She is in the paddocks where she can move from the sheep to the goat areas. Some days she is out with the 21 cows. Sometimes, she is going on a walk with Abby to North Ridge, Abby and Jake’s nearby farm where the layer hens live.  Or she walks with Pete to make a loop around the 13 acre field. But, her job, and we point that out to her daily, is to be on guard. That means, she can’t come in the house like Ochi. With this snowy winter, however, there are mounds of plowed snow which make it a cinch for a powerful dog to summit, thus scaling the fences, bound for the other side and freedom.

So, back to the paddock Ida went that wintry January evening and settled down to watch the night sky.

By the way, Pete did get to see the end of the Patriots’ game. He hoofed it back to the living room before the whistle blew and settled down to watch football.

Dogs are an iconic part of American farms. Border collies may be the first breed you picture and while these hard-working athletes are common, they aren’t the only useful ones. As a dog lover, I especially enjoy looking through Jan Dohner’s recent book, Farm Dogs. The sheer variety of dogs and their historic uses is inspiring. At Apple Creek we’re keen to keep two specific types of working dogs; terriers and livestock guardians.

Terriers
Fiercely loyal, tenacious and energetic the terrier is well-suited to farm life. These dogs are useful in keeping squirrels out of the barn, catching nesting mice in the hay mow and digging up burrows of ground hogs. Ever watchful, it is difficult to get anything past these dogs!

Terriers come in a wide variety of sizes based on their use.  The largest I’ve met is the Black Russian Terrier . These dogs weigh as much as 140 lbs!

Our first terrier was Chicory (pictured at left). Also called the Blonde Coyote, he lived to the ripe old age of 13. His years were spent on various farms across New England where he learned about farm life alongside Abby. Chicory weighed 35 lbs, large enough and tough enough to intimidate the livestock, but small enough to join us on the couch. We miss Chicory the most at lambing season. He wasn’t always at ease with people, but was an amazingly attentive nursemaid to our lambs. He loved to lick the lambs clean after they drank their bottles or to encourage them to drink up by licking their behinds.

Many readers know our newest terrier, Rye. He came to us in the summer of 2016 as a rescue from Arkansas. He is a mix breed and though his coat says “terrier” his behavior indicates he may have an equal mix of retriever. Ever playful, Rye loves a good ball toss and was described by our nephew as a, “real boy’s dog.” Rye only weighs 20 lbs and so he isn’t much for interacting with the livestock. He prefers cruising the fields looking for mice and voles. Like all terriers, Rye has a surprising bark which he loves to use. Often, he uses it to bring our attention to a piece of equipment that has changed location in the dooryard or to scare off potential threats. Both Rye & Chicory have proved they are more brave than brainy.  Rye has met several possums in his time here in Maine and he has to be convinced not to tangle with them!

Ochi is a Pyrennees / Maremma cross. She joined Janet and Pete’s household about 10 years ago and has slowed down the last few years. Ochi walks the perimeter of the farm every morning with Pete. This keeps large carnivores like coyotes out which keeps our animals safe. There are a wide variety of livestock guardian dogs from locations worldwide. Several studies are underway to use dogs to guard large sheep flocks in the American West.

Though the farm hasn’t had a coyote attack in more than 10 years, we’re sure that having Ochi around has helped. That’s why we’re adding a new member to our farm dog crew this season. We’ll be picking up a Great Pyrennes pup very soon! She’s been raised alongside goats at a farmstead in Massachusetts and we look forward to introducing her to the farm. This photo of the whole litter (below) may give you the same sense of excitement we have. We visited the breeder last week to identify a couple of prospective pups. The breeder will be watching each as they get introduced to their goats to find us just the right temperament– a independent and confident pup that will be up for the job. 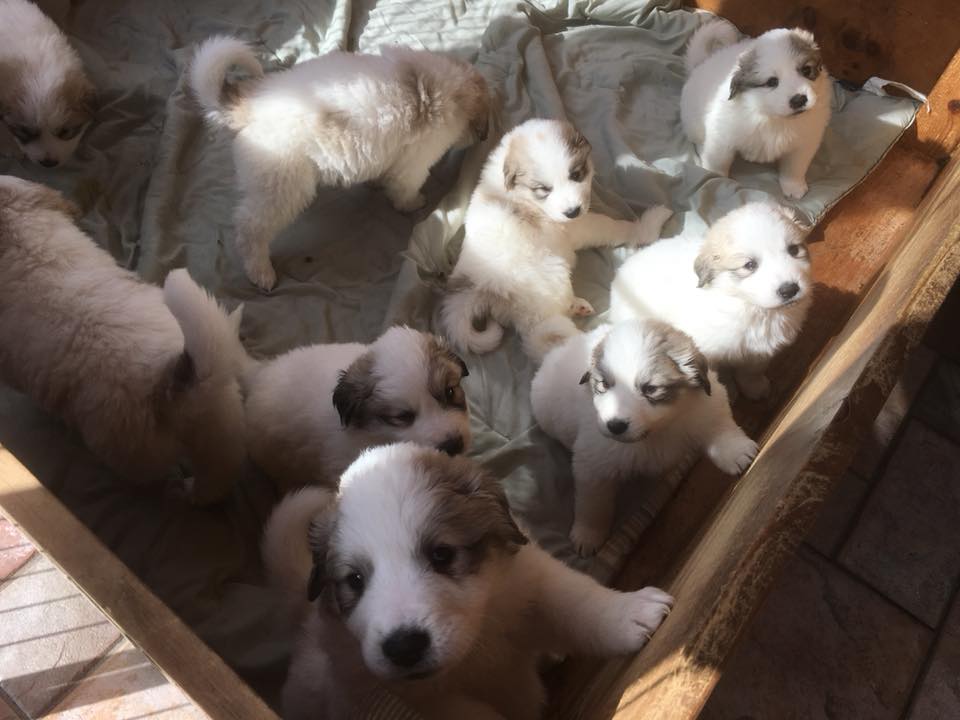 Our new girl will have her work cut out for her. In a recent blog post, Who Else Lives on the Farm we describe some of the recent uninvited guests who have been calling on our hens!  Our new pup will be trained as an LGD or Livestock Guardian Dog in order to spend her days (and nights) patrolling the fields and deterring owls, hawks and other would-be predators.

This will help us sleep better and eliminate the need to lock up our broilers and turkeys every night.  We’ve been reading our copy of Jan Dohner’s other book, Livestock Guardians to be sure we’re prepared and know how best to support our new pup as she learns basic obedience and how to trust her instincts. Breeds such as the Great Pyrenees don’t need to be “trained” how to protect their stock. For centuries they’ve been bred specifically for that purpose, so our instruction will mainly be corrected undesired behaviors such as chasing livestock. Stay tuned for more on this topic!